From the plains to the mountains, Alaïa takes up residence in the Crans-Montana snowpark 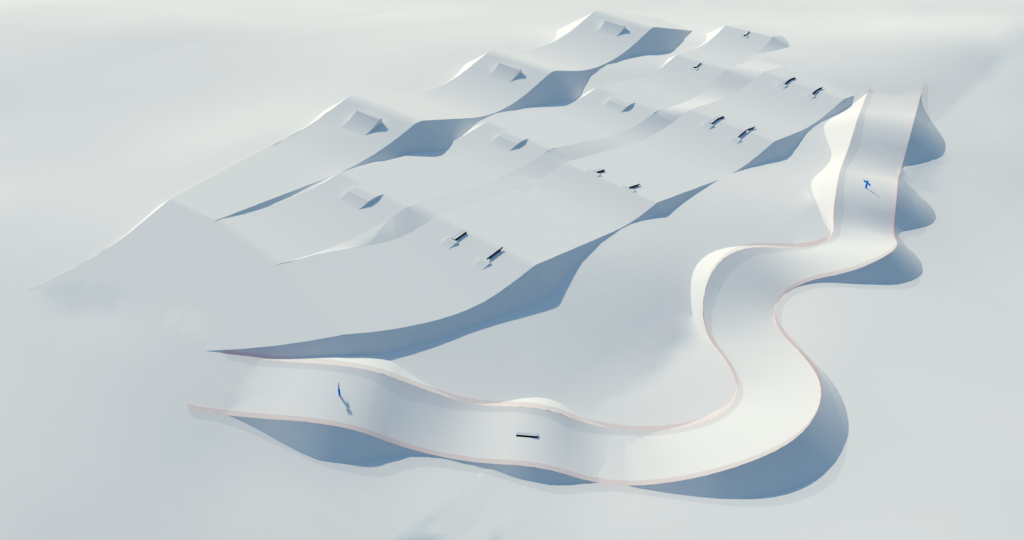 From the start of the winter season, the Alaïa group, in collaboration with the Helvepark company and its main partner Tudor, takes over the management of the Crans-Montana snowpark. An agreement has been signed with the Haut Plateau ski lift company, which will allow users to benefit from benchmark freestyle infrastructures.

The first snowflakes have appeared to whitewash the peaks, as a sign announcing the upcoming opening of the ski season, to the delight of ski fans.

This excitement is shared by the Alaïa group in more ways than one. After a very eventful start to the year, with the openings in May of Alaïa Bay in Sion and Alaïa Wake Surf in Bouveret, the young start-up from Valais is making its mark on the mountain. Indeed, Alaïa has just signed a 3-year agreement with the Crans-Montana-Aminona ski lifts for the operation of the snowpark on the area. Adam Bonvin, founder of the group, is delighted: “Thanks to this presence in the ski area, we can officially say that Alaïa offers the possibility of combining, in the same day, several sports such as snowboarding, skateboarding and surfing. It’s a bit of a childhood dream come true and I am delighted that our customers can live it now “. For his part, Philippe Magistretti, Chairman of the CMA group, declares: “ It is a great satisfaction to be able to entrust the management of the Crans-Montana Snowpark to the Alaïa group, a dynamic and trusted partner who not only has the expertise but also the vision for the future of freestyle. They can count on the support of CMA for the implementation of their project ».

With this change, the Alaïa group hopes to be able to contribute significantly to the resort’s revitalization strategy by bringing back a young and sporting audience. The Valais group can also count on the invaluable support of its partners, and in particular the Geneva watch brand Tudor, which has been present since the start of the adventure and which lends its name in particular to the Alaïa Parks by Tudor project.

The Crans-Montana snowpark is considered a benchmark in Switzerland, one of the largest with, in particular, an Olympic-sized half-pipe. The great peculiarity of Alaïa Parks by Tudor is that it is open from December to early June. From December, the lines open gradually, depending on the rainfall, with the Cry-d’Er area first, then the minipark at a place called “Mérignou”. At the end of the season, from May to June, the snowpark moves to the Plaine Morte glacier where many national teams come to train. Adam Bonvin adds: “Whether at the Alaïa Bay, at the Alaïa Chalet or, from mid-December at the Alaïa Lodge, our new hotel in the heart of Crans-Montana, high-level athletes thus have access to infrastructures adapted for training in ideal conditions. The complementarity of sports activities gives the resort of Crans-Montana and Valais an indisputable competitive advantage when teams have to choose their destination ”.

Focus on the long term

The management is entrusted, as since the previous season, to the company Helvepark, specializing in the design and construction of snowparks as well as the organization of events. Adam Bonvin explains: “We want to be accompanied by experts in the field and the Helvepark team has demonstrated its skills in other resorts as well as in Crans-Montana. This collaboration allows us to capitalize on the excellent work accomplished so far “. Romain Espejo, Director of Helvepark adds: “We are delighted with the confidence shown and to continue this project. Last year we had already been able to set up new modules and forge links with a few athletes and event organizers. We look forward to working with Alaïa to continue the developments ”.

Another important point to note will be the organization of events after a complicated season. The objective of winter 2021-2022 will be to offer a few freestyle events in the snowpark with the highlight being the Audi Nines coming in April, an event bringing together the 40 best freestyle skiing and snowboarding athletes in the world. .

Special products to combine the world of Alaïa will be sold online at www.alaiaparks.ch. We find in particular the “Day Pass” at the price of CHF 45.- for adults and CHF 37.- for children, which includes a daily ski pass at the snowpark with unlimited access to the Snowpark ski lift as well as 2 climbs from the station (either by cable cars Crans-Cry d’Er or the Montana-Arnouva gondolas and Arnouva-Cry d’Er chairlifts), an unlimited All Access pass for the Alaïa Chalet and, as an option, a surf session at Alaïa Bay, including the Winter Kit, valid until the end of April.